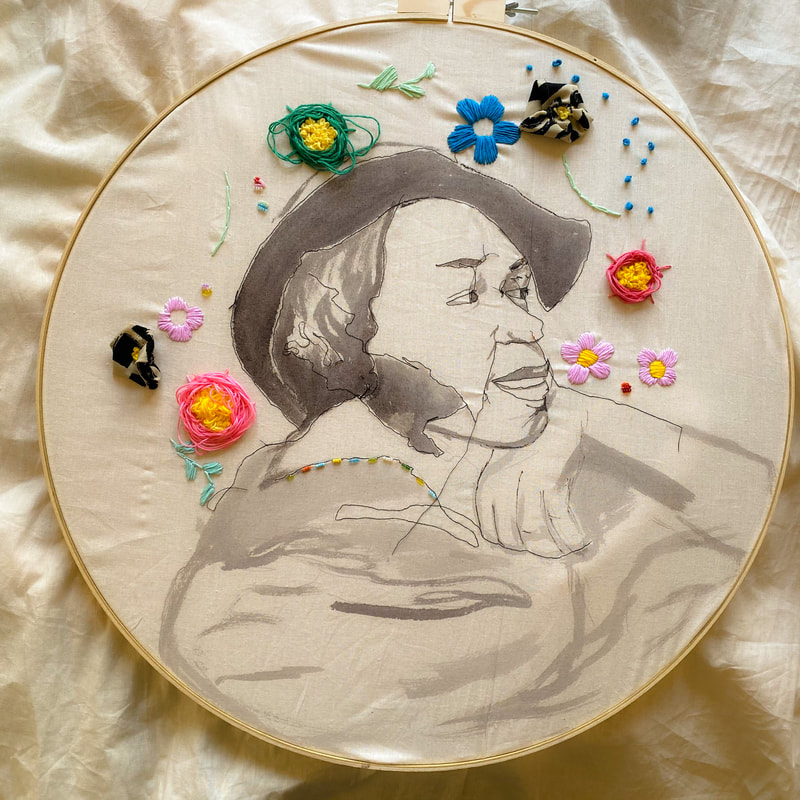 The Arts Oasis Interview with Artist and Writer Isis Davis-Marks

BIO: Isis Davis-Marks (b.1997) is a multidisciplinary artist and writer based in New York City. Through the use of painting, drawing, text, and fabric, Isis explores different materials in order to tell stories about identity, everyday moments, femininity, race and class.

I first learned about you through an article you wrote for the Smithsonian. I was wondering, do you consider yourself an artist or writer first?

For a long time I considered them separate and probably would’ve considered myself as more of an academic or a humanities person first. I was afraid to say I was either a writer or an artist because they both sound super fru-fru, not like real professions. The more I’ve written about art and the more I’ve worked for the Smithsonian, the more it has helped me learn about Art History which has definitely influenced the way I create things. Now I’m becoming a lot more comfortable saying I’m a writer and an artist.

We live in an age where many people have the means to snap a high-quality photo or produce a movie from a tiny machine in their pocket. A digital collage can be sold as an NFT for $69,000,000 online. The line between dystopia and utopia, in regards to the art world, seems very blurred. If everyone is an artist, is anyone an artist? I want to know how you feel as a writer and artist at this time.

I guess that’s still something I’m trying to navigate myself. What is the difference between fine art and crafts or the difference between fine art and really anything else? I do think that a lot of this comes down to institutionalized acceptance. I’m not saying that this is the right way to approach things or the wrong way to approach things or that art is less legitimate if someone just puts it on social media or if they have an MFA or they don’t, but I do think that at the end of the day, it’s about this question of recognition. which I think ties into your first question. Like do I consider myself a writer or an artist? I think a lot of it has to do with, “okay well what am I sort of recognized as?” or “when do I feel comfortable labelling myself as one thing as opposed to another?” And I do think that Instagram and a lot of these other social media platforms can allow people to sell their art and work with galleries.

It is liberating if you think about how artists of color and women who have often been excluded from big name institutions and galleries, can now have access to an audience and market. If Gagosian or the Smithsoinian are not going to put you in a show, you can take control and do your own thing. At the same time I do question, should the only work we look at be art that photographs well on Instagram?

I noticed that you depict some of the greatest feminist novelists of our time: Joan Didion, Zadie Smith, Toni Morrison. Can you explain the significance of these specific authors as they appear in your work?

I’m really interested in portraiture because I’m interested in this question of recognition and what it means to acknowledge someone. I think that stems from my obsession with existentialism which started when I was a teenager and very angsty and reading a lot of that kind of stuff. I’m interested in making art about female writers as well because A, they’ve inspired me a lot and B, especially for black women, a lot of depictions in the media you often see are either of musicians or actresses. I’m interested in how I can represent female academics because that’s not something you often see represented visually.  That’s something I really want to complicate because a lot of stock is placed on how femme bodied people look, and less emphasis is usually put on intelligence. Not to say that there is only one form of intelligence. I think that there are many ways to be intelligent and use feminine energy and power--but I am interested in this because I do think especially going to Yale and being a Philosophy major and being in certain academic spaces, you don’t see a lot of representation in that regard. I feel like the conversation about representation is very blanket when it comes to talking about artists of color and even just thinking about portraits and stuff like that it’s like, “yes I get it you want to paint portraits of people,” but for me I’m specifically interested in women and how they’re represented in media. That was something I studied a lot because I wrote my thesis on pornography and representation.

My favorite medium you work in is embroidery. Your style is unique and I notice that you play with colors in a very deliberate way. Was there a specific inspiration for your needlework?

As a kid all I did was fabric; I wanted to be a fashion designer. I was super into making clothes and blankets and pillows and my friend and I would sell jewelry in elementary school. My aunt is super into fabric dying and crocheting and knitting. For me, I feel like craft came before art. I was always doodling and drawing, but I would not say that I was the typical person who went to art school, developed a portfolio, and had super technical skills. I still feel like I’m trying to teach myself a lot of technical aspects of painting and drawing.

I feel like my training inside of art school was very focused on traditional media. Again, it sort of goes back to this question of intellectualism and what institutions like. They like painting, and painting is such a loaded discipline with so much art history behind it and it’s steeped in European educational practices--especially at these stupid Ivy league schools. After I graduated, I started going outside of New York and looking on the internet and doing the things that I had done before I went away to school because it’s a very specific way to learn and the people in that art department show you very specific art; I don’t feel like a lot of it is super craft focused either.

I discovered people like Sophia Narrett, and I know we talked about Cynthia Talmadage before, but I feel like she’s a really big influence on me too--I really like pointillism. Also, Suchitra Mattai. I think that was the last show, that show and the Becky Suss exhibition at Jack Shainman. Those two shows are the biggest influence on my work right now. Suchitra does a lot of work with embroidery and craft and painting. I don’t think I’m doing quite the same thing, because I’m painting more on unprimed surfaces whereas she paints more on primed surfaces and she does a lot of installation work, but I was just super influenced by her because she is of Carribean and Indian descent and part of my family is from Trinidad. I really related to what she was saying about indentured servitude. Seeing her work made me less afraid to incorporate fabric into my work. I’m trying to do something similar to her. I love how she incorporates the embroidery with the painting, but I think for me what I'm focusing on right now is trying to make embroidery more of the foreground as opposed to a background element.

Your illustrations seem to largely speak to police brutality and the BLM movement; I was most struck by a painting you created which features a young woman transfixed by her iphone shadowed by a speech bubble that reads: “I wonder if this will look cool on Instagram.” Can you speak more about the theme of performative activism you depict here and more generally what you hope to convey through your illustrations?

The reason I started illustrating is because my friend who wrote for the Rumpus was in contact with the editor and told me they were in need of illustrators. It seemed like a nice opportunity to be able to work with people for illustration so I decided to apply and the editor liked my work and said she’d be open to having me do illustrations.  I thought it’d be great too because it would force me to become more acquainted with illustrator and digital art.

That article is about gentrification in Harlem and the protest movements that were happening last summer. I was just thinking about that because I remember seeing so much performative activism, like you said. So I thought this could be a funny thing to do. And I guess that’s kind of what I want to do too because I feel like for me as a Black artist right now so much of the work that gets attention is just so serious and so zombie-formalist, like I’m thinking about Kehinde Wily and Kerry James Marshall. I like those artists and they obviously have paved the way for me in a lot of ways, but I feel like I’m more satirical.

We invite you to join The Arts Oasis, a calendar and guide to the new virtual landscape. As a member, you will be able to save your favorite events and request reminder emails so you never miss out.
You can also submit events and your artwork.
The Arts Oasis is a not-for-profit platform established to support the arts community and independent creators.